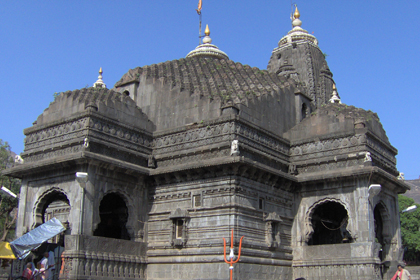 Trimbakeshwar is a holy village, 28 kilometers from Nashik. It is one of the twelve Jyotirlinga’s. There is a mountain named “Bramhagiri”, which is the part of Sahyadri mountain ranges. Trimbakeshwar is situated in the valley of Bramhagiri. Bramhagiri is the origin of sacred river Godavari. This is a beautiful natural place with cold weather as it is situated 3000 ft. above sea level.

The Story behind the origin of Ganga

On occasion of marriage of Lord Shiva and Parvati, Shri Bramhadev worked as a priest. On occasion of Saptapadi, Bramhadev touched the feet of Mata Parvati and all of a sudden the lust took birth in his mind and at the very moment he discharged semen. Before he could wipeout hi semen, with 60,000 molecules, 60,000 sages took birth. Feeling ashamed of self, Bramhadev tried to escape from the marriage place. But Lord Shiva knew the reason behind his escape. He prevented Bramhadev and prepared the holy water with all the material of the earth. Then made it more purified with the power of Mantras. And handed it to Bramhaji saying, O Bramhaji! now you will be freed from all of your sins and will get the liberation from the lust. Because this holy water destroys all kinds of sins.

The Arrival of Ganga in the matted hair of Lord Shiva

Danavendra Bali started his 100th Ashwamedh Yagya. Indradev and other gods doubted of the King Bali’s conquer on the Indra’s throne by the power of Bali’s ascetic practices.


Afraid of this idea in their mind, Indra and all gods ran to Lord Vishnu and prayed him. Lord Vishnu came down to earth in form of “Vaman” (Shortman Monk). And with his great knowledge, he defeated Daityaguru Shukracharya and other Rishimunis. King Bali was impressed with Vaman’s knowledge. He offered him to ask any three wishes. Vaman demanded three steps of land and King granted his wish. Vaman expanded himself to extremely large human body and measured entire earth with first step and the entire universe with the second step. Now, he asked Bali Where to put the third step?
Generous King Bali bowed down before Vaman and offered him his own head to place the third step. Pleased with his liberalness, God Vaman took the adoring form of Lord Vishnu and promissed Bali to grant any wish. Bali requested Vishnu to stay at his home along with the Goddess Laxmi so that he could enjoy the fate to adore and worship every day.
When Lord Vishnu, in form of Vaman, placed is second step into the Satyalok. He worshiped Vishnu’s feet with the holy water received from Lord Shiva. To prevent the spilt water while washing feet, to go into the Pataal lok, Lord Shiva held all the water into his thick hair. Thus that water is called as Ganga.

Shri Gangaji’s arrival onto the earth:

Seeing River Ganga in the form of a woman closely associating her husband Shankar, Parvati was unhappy. She planned to drive Ganges away from her husband.

As part of the plan Parvati and her son Ganesh came to live in Gautama’s Ashrama with Parvati’s friend Jaya. There was a famine of 24 years and people were affected by the pangs of hunger. However, Varun – the God of Rains, pleased with Sage Gautam arranged rains every day in Gautam’s Ashram, which was in Trimbakeshwar. Gautama used to sow rice in the surrounding fields of his Ashrama in the morning, reap the crop in the afternoon and with it fed a large group of rishis, who took shelter in his Ashrama on account of the famine. The blessings of the group of rishis increased the merit (Punya) of Gautam. Lord Indra’s position became shaky because of his increased merit. So Indra ordered clouds to rain all over Trimbakeshwar, so that the famine will be over and Rishis will go back and the increasing merits of Gautam will be weakened. Although the famine was over, Gautam urged the Rishis to stay back and kept on feeding them and gaining merit.
However Once he saw a cow grazing in the paddy field and he drove her away by throwing Darbha (sharp, pointed grass). The slender cow died by this. It was Jaya – Parvati’s friend, who had taken the form of a cow. This news upset the Rishis and they refused to luncheon at his Ashram. Gautam requested Rishis to show a way out of this sin.
He was advised to approach Lord Shiva and request him to release Ganges and a bath in the Ganga would set him free of his sins. Gautam then practiced penance by going to the peak of Brahmagiri. Lord Shankara was pleased by his worships and gave him the Ganga.

However, Ganga was not prepared to part with Lord Shiva, which irritated him. He made Tandav Nrutya (dance) on the peak of Brahmagiri and dashed his Jata there. Frightened by this action, Ganga appeared on Brahmagiri. Later on Ganga appeared in the Trimbak Tirtha. Gautam praised her but she disappeared in anger.
Gautama could not bathe in her waters. Ganges then appeared in Gangadwar, Varaha-tirtha, Rama-Laxman tirtha, Ganga Sagar tirtha. Still Gautama could not bathe in her waters. The Gautama surrounded the river with enchanted grass and put a vow to her. The flow stopped there and the tirtha thus came to be called Kushavarta. It is from this Kushavarta that the river Godavari flows up to the sea. The sin of killing a cow by Gautama was wiped off here.